There was a time when I was sure I would find what I was looking for in the crashing ocean waves.  I lived in a small faraway place that nobody has ever heard of, and for that I am going to choose to leave up to your imagination.  You can fill in your creative interpretation of such a magical place and there was indeed a time I called the ocean my neighbor.  In those days I was tempted by the seemingly impossible to read currents whose shades of blue can only be found in bodies of water so close to the equator of this planet.  The island I lived on was one of many islands who have long admired the sea, however I wanted to ride on its back no matter how bold it seemed to do so.
Surfing seemed like it would be the device which woke my spirit, but as is the case with many things in life, I was only partially correct.  While I was able to catch a few waves from the coast of that island home, it soon occurred to me that the ocean was a powerful spirit that nobody should try to tame.  Was that what I wanted?  To tame something?  The very idea made me a little uncertain and I felt that same uncertainty each time I plunged into a wave.
I can recall falling from my board, a hand-me-down from another Peace Corps volunteer, and being cast into the tumble among the strong ocean waves.  Imagine the spin cycle setting on a washing machine however much saltier.  Once, I abruptly hit the floor of the ocean with my back and the thought would haunt me into that evening when I had a chance to dwell on how bad that could have come out should my body have been positioned differently.
Even though my poor ability to become a decent surfer was probably affected greatly by the rough aquatic conditions, I still grew a deep passion for the world beyond the tides.  I would later trade my interest in surfing for an absolute passion for scuba diving and since then I have made my peace with the crashing waves, although nowadays their surges can be felt in every tissue of my body from far below the surface of the water.  The waves have taught me unforgettable lessons about the nature of water and its strong belief in freewill, but the mysteries below have cast spells on my soul that cannot be broken.
All the while, my early days of ocean appreciation came with a child-like wonderment of this blue planet.  I used to sit, toes buried in sand, and watch the strange dark indigo line finely carve out the place where the ocean ends and the sky begins.  Moments like this have burned themselves into my memory and sit on the same shelf in my brain that holds memories of my grandparents' mural on their wall, the one that I used to stare into for hours as a small awkward version of myself.  The problem is that we don't get to have these experiences anymore, we just relive them in our minds, no, our souls, and sometimes in life we stumble on something that brings us back to a different place.
I'm sitting here with a bar of Seaside Orchid, a cold process soap by Earth Berry Apothecary.  It's beauty matches that of a gemstone, although its texture is uniquely different.  Tucked between rolling waves of blue ocean water are tussles of sand and white seafoam, all of which create a beautiful resemblance of movement.  The artist clearly had several real-life references of the tides and the top of this work of art has actual chunks of sea salt to remind us that treasures can be found beneath the savory splashes of the sea.
And, it smells great.  Like, really great.  I'm there man.  I'm really tan and wearing an unbuttoned shirt with a seashell for a necklace, one I found earlier.
This soap is an experience and Earth Berry Apothecary has absolutely nailed it.  Their products are unique and each tell a story, one that is part of your own narrative.  It was hard to choose just one product to review and in the future I will continue to review more.  However, something called to me with Seaside Orchid from the moment I picked it up.  Time stopped.  I went somewhere else and for just a brief passing of a few minutes I was able to go back to somewhere very special to me and I'm certain you will do the same when you check out their catalogue.  It's a shame that you cannot smell a picture, so you will have to trust your intuition a bit and know that each and every product you see has been made with love, intention, and a bit of magic. 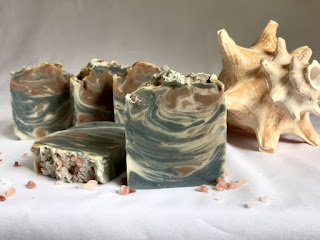